The monthly labor market report was the highlight of the shortened holiday week, and investors responded positively to the optimistic data. In June, the U.S. economy added 195,000 jobs, easily beating the consensus estimate of 165,000. Revised data for April and May also confirms that the labor market has been improving for three straight months.[2] While the unemployment rate remained unchanged at 7.6%, a Moody's Analytics report stated that the current rate of job growth should lower the unemployment rate by a half percentage point per year, meaning the economy might achieve the Fed's target rate of 6.5% by 2015.[3]

The positive labor report also added some volatility into the mix as investors became increasingly convinced that the Fed might start tapering its bond purchases after the September FOMC meeting. In the second quarter, job growth averaged 196,333 per month, well in line with the 200,000 jobs that economists say the Fed would like to see each month.[4] Taken with all the other upbeat reports on housing, manufacturing, and consumer spending, a September trigger on tapering seems more likely.
Looking at the week to come, we can expect investor attention to be riveted to the FOMC minutes from the last meeting and Ben Bernanke's follow-up speech on Wednesday. While the meeting announcement, released on the day of the FOMC meeting in June, showed no policy changes, analysts will be pouring over the minutes for clues about future policy changes and taking the temperature of Fed opinions about the economy. The stock market has been in an odd place in the past weeks as investors responded nervously to news of future Fed policy changes. However, the market rally last week shows that investors are still willing to see the bright side to an improving economy. Although we don't place too much faith in technical indicators, the S&P 500 finished out the week above its 50-day moving average, a signal that has sometimes heralded a rally in the days or weeks to follow.[5]  Although we can certainly expect additional bumps in the road ahead, we can hope for a strong third quarter market performance. 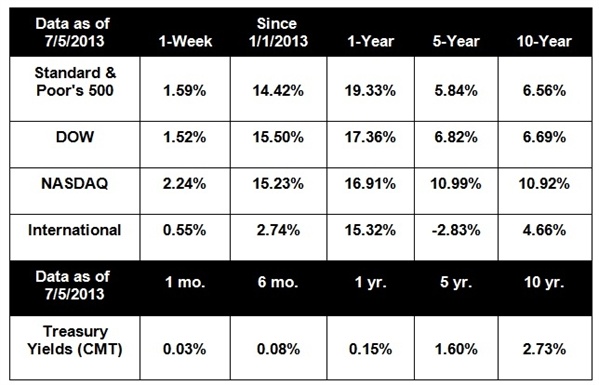 Notes: All index returns exclude reinvested dividends, and the 5-year and 10-year returns are annualized. Sources: Yahoo! Finance and Treasury.gov. International performance is represented by the MSCI EAFE Index. Past performance is no guarantee of future results. Indices are unmanaged and cannot be invested into directly.

The Standard & Poor's 500 (S&P 500) is an unmanaged group of securities considered to be representative of the stock market in general.

The Dow Jones Industrial Average is a price-weighted average of 30 significant stocks traded on the New York Stock Exchange and the NASDAQ.

The Nasdaq is a computerized system that facilitates trading and provides price quotations on some 5,000 of the more actively traded over-the-counter stock.